Meat is one of the largest impacts on the environment. It's not only a significant factor in climate change, it's also one of the largest uses of our arable land via both livestock & grain cultivation. This category contains posts covering news, statistics and ideas for reducing meet impact on our environment. 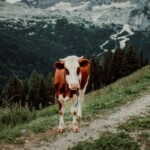 The beef industry is notoriously responsible for the harmful effects of climate change -- but could regenerative beef let you eat your steak with a clean conscience? After making a thorough review of all the literature available on the subject, we think that guilt-free beef is the real deal. If you've been wondering about how to keep hamburgers and steaks in your diet without … END_OF_DOCUMENT_TOKEN_TO_BE_REPLACED

Introduced only in the last decade, the climatarian diet has already started to gain devoted followers. But what is this new way of eating, anyway? And if you want to become a climatarian, what would you have to change in your diet? … END_OF_DOCUMENT_TOKEN_TO_BE_REPLACED

Look, there are plenty of things in life to argue about. Which power ranger is the best, whether chocolate or vanilla is better (chocolate, by the way), what really happened at the end of Inception… You know one thing we don’t need to argue about? Whether or not Americans contribute significantly to meat’s impact on global warming. And yet the meat industry and its … END_OF_DOCUMENT_TOKEN_TO_BE_REPLACED

You've probably landed here because you're trying to help someone understand the impact of meat on global warming, or you're trying to learn more yourself. A view without fact is just an opinion, but luckily there are tons of facts to support the claims that meat consumption has an impact on the environment. Whether you're a Prius owner or someone who swears they'll never give … END_OF_DOCUMENT_TOKEN_TO_BE_REPLACED

You’ve heard chatter about meat consumption and the environment — but do you really know the true impact of meat on global warming? Here are 10 crazy statistics about that meat industry and global warming that will have you saying, “WTF”: … END_OF_DOCUMENT_TOKEN_TO_BE_REPLACED