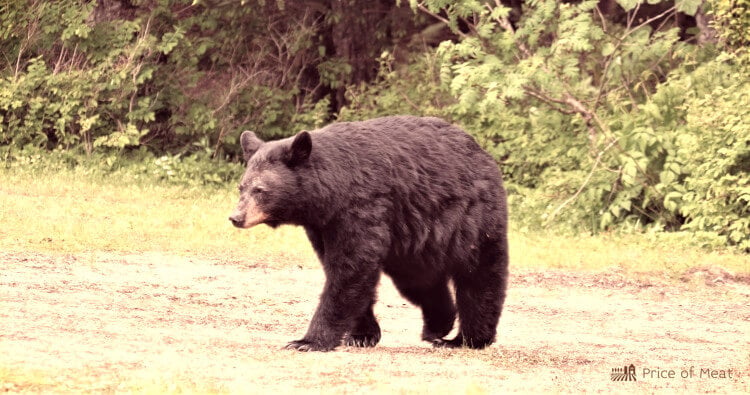 It turns out that popular depictions of hungry bears in children’s cartoons (think Yogi and Pooh Bear) may not be that far off the mark. Even if they’re not eating honey straight out of the jar, bears are always scrounging around for the proverbial picnic basket at the campsite — as any hiker in the Northeastern woods has likely learned the hard way!

Thankfully, though, that’s about where the cute and cuddly similarities end. In the wild, bears are prolific omnivores, eating everything from grasses and grains to berries, nuts, seeds, and any food left carelessly unguarded by campers and picnickers. Depending on where an individual bear lives and the season, their diets can vary widely — an important bit of information that we’ll discuss in detail later.

If you’ve been curious about tasting bear meat for the first time, you’ll have your work cut out for you: Since they can’t be farmed, bears must be hunted for their meat. Especially now, with hunting’s continual rise in popularity, bear meat will often be in short supply.

That’s why we’ve taken the time to study up on all things bear meat, and bring you this guide on where you can find it to buy online, as well as how to cook a simple and straightforward black bear roast that shows off the meat’s unique flavors.

Pinning down an exact taste description of bear meat is a difficult task, indeed. Because as the old saying goes, “you are what you eat” — and what a bear has been eating will change so much about the flavor, texture, and fattiness of its meat.

Generally speaking, though, North American black bear meat — the only type you’ll be likely to find available for sale in the U.S. — has a taste similar to wild venison, with a deep ruby red color and a texture closer to pork. Don’t just take it from me, though: What follows are descriptions of the taste of bear meat from hunters and sporting men both classic and modern.

Frank Forester, an English journalist and sporting man of the 1800s, had this to say about the taste of bear meat in his book Frank Forester’s Field Sports of the United States, and British Provinces, of North America:

The flesh of the bear is savory, but rather luscious, and tastes not unlike pork.”

He then goes on to explain that –

it was once so common an article of food in New York as to have given the name of Bear Market to one of the principal markets of the city.

Even Theodore Roosevelt wrote of the similarities between the meat of young American black bears and pork, saying in his Hunting Trips of a Ranchman that it was not as coarse and flavorless as grizzly bear meat.

Lastly, modern Canadian hunter George Gruenefeld, in his article titled “Dining on Black Bear” (source) notes that the flavor of spring bear meat “tends to be rather mild” compared to the “strong but pleasant flavor” of bears hunted in the fall, as well as warning that “a bear that’s been scarfing down fish… reeks worse than low tide on a hot August afternoon.” Well said, George!

Aside from being tasty, wild caught bear meat is also quite nutritious. Compared to farm-raised meat, wild game will always have a higher ratio of protein to fat. This makes it trickier to cook (more on that in a moment), but much more heart healthy than your standard beef or pork cuts. In fact, the American Heart Association recommends eating a low fat diet for heart health — making bear meat a heart healthy protein source.

The Alaska Department of Fish and Game gives us this nutrition information on wild caught black bear meat:

[Bear] meat is typically lower in saturated fat and calories than domestic meat. Alaskan game generally feeds on wild plants, shrubs, and trees that do not contain pesticides or herbicides. When game meat is well cared for, many people prefer it over domestic meat because of its unique flavor, low fat, and lack of additives such as antibiotics or growth hormones.

As with any wild game meat, eating bear meat comes with a different set of risks and considerations than store bought meat. But by learning more about how to handle, store, and cook your meats, you can effectively reduce these risks to nearly zero.

According to Healthline, salmonella and E. coli are the biggest risks for store bought beef, pork, chicken, and fish. That’s why they recommend common sense measures, like washing your hands and not buying meat that’s expired, as well as guidelines for storing and cooking meat. Raw meat (including wild game) lasts about three days in the refrigerator, so freeze it if you plan on storing longer than that. Safe cooking temperatures depend on the meat you’re cooking, and range from internal temperatures of 145 degrees to 165 degrees fahrenheit.

These safe cooking temperatures are especially important when preparing bear meat, as wild game is prone to different bacteria and viruses than store bought meat. Trichinosis, a parasitic roundworm, is the main culprit in bear meat. And according to the Alaska Department of Fish and Game, these parasites can be passed from tainted meat to humans and dogs — if, that is, the meat isn’t cooked thoroughly.

That means cooking to internal temperatures of at least 160 degrees F, though higher temperatures will mean safer meat. And since it’s almost impossible to identify tainted meat with the naked eye, it’s best to always cook your bear meat to this temperature or higher. You’ll hear this advice doubled in the next section; it really is that important, and I don’t want you to forget it.

How to Cook Bear Meat

Cooking bear meat — or any wild game meat, for that matter — requires extra special care as compared to meat that you might get from the supermarket. Because wild animals eat from a larger variety of food sources than farmed animals, they’re more prone to infections from parasites. In this case of black bear meat, this comes in the form of trichinosis: An infection by parasitic roundworms that remain in the meat of wild game even after it has been killed.

Luckily, there’s an easy and foolproof solution that eliminates this risk: Just thoroughly cook your black bear meat, and any parasites will perish as a result of the increased cooking temperatures. Take it from the Mayo Clinic: “Cook pork and meat from wild animals to an internal temperature of 160 F throughout… Don’t cut or eat the meat for at least three minutes after you’ve removed it from the heat.”

And what’s the best way to ensure a thorough, high, even temperature throughout a large cut of meat? With a roast, of course!

Instructions for preparation are amazingly simple: Just add everything to a slow cooker or Dutch oven, set it on high, and cook for 4 to 6 hours. Check the internal temperature with a meat thermometer before serving, and then enjoy the rich and tender meat with your choice of mashed potatoes or bread and a vegetable side.

Types of Meals to Make With Bear Meat

Just how many ways can you cook with bear meat? More than you might imagine. The black bear roast and grilled bear steak with mushrooms (explained above) are a tried and true place to start, but they’re only the tip of the iceberg for preparing bear meat. Let’s take a look at other bear meat “no recipe recipes”, as well as how you might pair those with sides to make whole meals.

Even though it is much leaner than ground beef, bear meat can still make a fine burger. Of course, you’ll need to grind it yourself, as it’s quite difficult to find a butcher who will process wild game for you. An electric meat grinder will make quick work of whole cuts of bear meat, turning them into easy to work with ground meat.

You might struggle with getting bear meat to form into perfect patties on its own, though; the low fat content tends to make them crumbly. Try adding a little bit of high quality olive oil, crumbled cheese, or bread crumbs to give them better texture. Served with a side salad and all the fixin’s, this makes for a surprising blend of comfort food and healthy nutrition.

Bear meat can also provide the lean protein necessary for top quality sausages. Use that same electric grinder from above, fit the sausage attachment on it, and then blend the bear meat with a touch of pork fat for texture and flavor. Because bear meat has a strong flavor, you can add spices and seasonings to your heart’s content. I’d imagine a generous dose of paprika (a la Hungarian sausages) would be just the thing to create delicious bear dogs. And while you’re at it, why not pair that with a side of sauerkraut and some mashed potatoes?

Steaks might be the most challenging way to prepare bear meat, unless you enjoy your steaks well done. Remember that minimum recommended internal temperature for bear meat? Well, 160 degrees F is enough that the entire steak will be cooked through, with little to no pink center. And because bear meat is leaner than beef, being cooked to well done can leave these steaks dry and unappetizing.

To avoid this dry finish, take a tip from Mexican cuisine: Marinate your bear steaks in a flavorful mix of oil, salt, and spices. A good portion of high quality olive oil, a generous few grinds of salt and black pepper, and a handful of mixed herbs and chili powder will give it flavor and moisture. Then, even as you fully cook the steak, it will retain a big hit of flavor and tenderness. Serve this with roasted potatoes, and you’ve got a full meal.

Where to Buy Bear Meat

Unless you’re feeling particularly adventurous, hunting for black bear meat will be outside of most peoples’ abilities — but this doesn’t mean you’re out of luck for buying and tasting this elusive meat.

ElkUSA is a ranch-based natural meat company, offering a wide selection of uncommon, exotic, and wild game meats such as buffalo, reindeer, elk, and yes: bear! You can keep an eye on the bear meat section of their website here, but as of the time of writing they were out of stock for most cuts of bear meat due to the difficulty of procuring it during the pandemic.

A smaller scale, hometown operation based not far outside of Chicago acts as a fine distributor for all sorts of wild game meats as well: Czimer’s Game & Seafood. Though their product availability varies with seasonal and market fluctuations, they have a full list of black bear cuts available in their catalog.

If you are interested in hunting for black bear, be sure to check your State’s Wildlife Agency website for regulations. Bears usually have very specific regulations and legal areas for hunting. You will likely have to travel or find a hunting friend to introduce you to prime habitat.