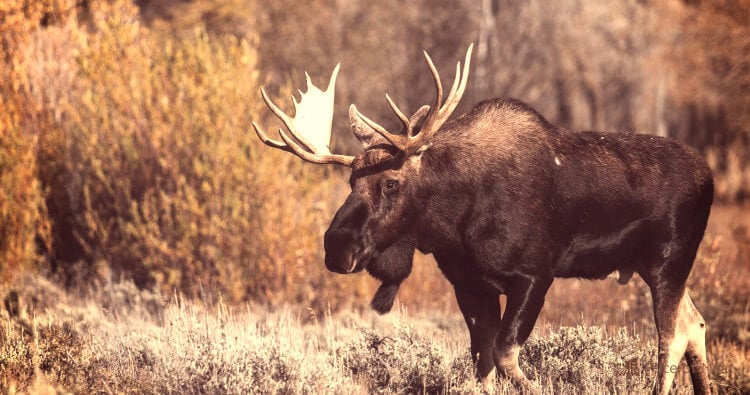 The largest and heaviest member of the deer family, the moose (or elk, if you’re in Europe or Asia) is certainly an uncommon game meat for anyone outside of Alaska. Even if you’re not planning on moving to the snowy tundra, though, you can take part in cooking and eating musky and beef-like moose meat.

Thanks to the magic of the internet, moose meat is available year-round for curious carnivores — and we have all the details of where to get it, how to cook it, and what to expect from your first order of moose meat. Follow along as we explain the ins and outs of ordering and handling this exotic meat, including a simple recipe for a slow cooker moose stew that’s as delicious as it is easy to make.

Take one look at a moose, and you’ll begin to see what it might taste like as well. They’re as large as a cow, but still most closely resemble a deer — giving them a lean, beefy flavor that still has the characteristic sharp and gamey taste of wild deer.

Suzanne Bishop, a resident of Fairbanks, Alaska whose family hunts moose for subsistence over their long winters, has this to say about the taste of moose meat:

The meat is very dense, and because all their fat is stored between the hide and the muscle the meat is very, very lean. It tastes like its habitat — moose eat a lot of willow, so to me it tastes like willow buds smell in the spring. It has a strong “gamey” taste.”

She also notes that “The age and gender of the moose also make a difference… A young cow is milder tasting than an older bull.”

In your author’s experience with tasting moose meat, we very much agree: It’s a gamey, wild meat with a lean, hearty substance to it much like grass-fed beef.

Perhaps in the end, the taste of moose meat is best left to one of America’s great naturalists, Henry David Thoreau, in his book “The Maine Woods”, where he says that moose meat is:

If it were more readily available in stores, moose meat might have the distinction of being the healthiest red meat you can eat! It’s high in protein, low in saturated fats, full of vitamins and minerals, and has a desirable fatty acid profile. And all of that combined? It makes for one super healthy red meat.

Here’s the nutritional breakdown for moose meat per 100 grams, courtesy of Nutritionvalue.org:

And on top of all that, it’s loaded with a full amino acid profile. Compared to even the leanest of ground beef, moose meat has more protein, less fat, and more vitamins and minerals per serving.

So even though it’s harder to source and requires a careful hand while cooking, anyone eating moose meat regularly can expect to see noticeable health benefits. For example: As a low fat, high protein meat, moose would fall into the guidelines set out by the American Heart Association for reducing your risk of heart disease.

Like all game meats, moose meat requires special care and handling to reduce the risks associated with it. But by learning how and where to store and cook moose meat, you can reduce these risks to almost zero.

Before we get in the specifics of handling moose meat, let’s have a quick refresher on general meat handling practices using Healthline’s meat safety guidelines as a reference:

If you’re looking to cook moose meat as safely as possible, all of these guidelines apply. According to the Alaska Department of Fish and Game, however, you’ll need to take special precautions when eating wild game meat such as moose:

In short: If you’re cooking with wild moose meat, make sure it’s fully cooked — and use a thermometer to check this, not just your eyes and intuition.

There’s an important distinction to make here, though: What you’ll sometimes hear referred to as “moose steaks” actually come from the North American elk. And since these can be farm raised, they don’t have the same dangers associated with undercooking wild moose meat. If you’re convinced that you want to eat this type of meat as a medium-rare steak, go for the farm-raised elk instead.

How to Cook Moose Meat

Thanks to its low fat content, moose meat is both intensely flavorful and requires careful preparation to bring out its natural deliciousness. Because it’s so lean, you should avoid cooking cuts of moose meat as steaks — where they’ll be far too tough and gamey — and instead go for long cooking times, extra tenderizing, or overnight marinades.

The recipe with which I was introduced to moose meat, and still my favorite way of cooking wild game meats, is a take on Julia Child’s classic “beef bourguignon” — a French wintertime staple stew consisting of beef, vegetables, and a red wine sauce, all cooked down for many hours.

For use with moose meat, try this simplified recipe. You’ll need:

The whole recipe works beautifully in a slow cooker, but you can also make it on the stove in a large pot over a low simmer.

Putting the whole stew together is simple: Just brown the onions and garlic in 2-3 tablespoons of oil (this will take 5-10 minutes), then add the moose meat and vegetables. Stir everything while it cooks for another 5-10 minutes, then add the stock and wine. Bring it to a boil, reduce to a simmer, and add your choice of dried herbs — thyme and oregano work particularly well. Continue to taste the broth while the vegetables cook for 30 to 45 minutes, adding salt and pepper to make everything exactly to your tastes.

And voila! A delicious moose meat stew. Serve it with bread or potatoes, and you’ll have a full meal fit for wintertime feasting.

For a different take on how to cook moose meat, I’ll defer to Thom Beers — executive producer for the hit TV show “Ice Road Truckers”. His recipe for a moose meat marinade is taken directly from the Alaskan frontier, making it perhaps the most authentic way to prepare moose meat.

Types of Meals to Make With Moose Meat

Outside of dedicated hunters, not many people know how to make meals with game meat. But honestly, there are just as many possibilities for delicious meals — both simple and complex — as you get with store bought meat.

To jump start your moose meat meal ideas, let’s get into some of my favorite “no recipe” recipes!

Though moose meat is too lean to make a good burger on its own, there’s a simple trick you can use to make delicious moose burgers. Just add bacon! If you grind in one part of bacon for every four parts of moose meat, it will add enough fat to hold the burger together and let it cook evenly. The easiest way to do this is with a home model electric meat grinder. Of course, this isn’t the best way to go if you’re looking to keep things healthy; but once you try this recipe for burgers, you might never want to go back to lean meat.

If you’re looking for a steak-like experience without the risks of undercooking, preparing moose in the style of carne asada or fajitas is an excellent alternative. A quick marinade of oil, garlic, cumin, and lime juice will start to tenderize the moose steaks, which you’ll then slice thin and sear quickly on a super hot grill. Serve this with tortillas, roasted peppers and onions, and queso fresco for a quick weeknight meal.

Combined with a high quality olive oil, mozzarella cheese, and toasted bread crumbs, moose can make some of the tastiest meatballs you’ll ever have. Smother them in a red sauce and serve with spaghetti and a glass of red wine for a rustic Italian-American meal.

Because of its wild, gamey flavor, moose meat is also excellent in any dish that usually calls for goat meat. This includes all sorts of curries and satays, from the mildest tomato-based sauces to the spiciest Thai green curries. Cut your moose into bite-size pieces and sear them on each side, then cook in a store-bought curry sauce. Serve that with rice or flatbreads to complete the meal! If you’re feeling like a culinary challenge, follow this video to make your own Punjabi style moose curry by replacing the mutton.

Where to Buy Moose Meat

Moose can be a particularly difficult meat to source for most people in the United States, due to the fact that they cannot be raised on farms. In fact, true moose meat is derived entirely from wild-hunted moose, and is not available for sale to the general public.

That said, the North American Elk — second largest of the deer family behind the moose — is raised on farms in the United States and Canada, and therefore available for purchase online. While it may not have the same intensity of flavor as true moose meat, this elk meat is still markedly different from beef and will give you a taste of what eating wild moose might be like.

Elkusa.com is perhaps best known for their selection of elk and other American-raised wild meats, and they offer a wide selection of cuts as well as elk burger patties. Check out their entire store here, and consider ordering in larger quantities to get significant discounts.

Fossil Farms pastures their elk on 60,000 acres of farmland in Central Canada, and offers many cuts for sale alongside other exotic meats. Their elk sausage with apples and pears looks particularly appetizing, as does their naturally cured elk salami. See their entire selection of North American elk meats here.

Unless you’re planning on moving to much colder climes, wild moose meat will be off the table for you — but their slightly smaller cousin, the North American elk, offers much the same flavor while being readily available online. Try making your favorite beef recipes with elk meat, and you’ll be intrigued by the wild flavor that it can add to a soup or stew.