Pepperoni is, without a doubt, one of the best types of cured meats created by man. Something about the combination of fatty and spicy flavors puts it a cut above other types of deli and cured meats.

For the longest time, vegans and vegetarians had to go without this (along with fish, pork, chicken, sausages, and beef) delicious creation due to their commitment to ethical consumption and dietary restriction.

In addition to this fantastic vegan pepperoni, the Herbivorous Butcher makes other plant-based meats. You can find them at most grocery stores or online on their website.

The use of authentic, high-quality Italian ingredients is some of what separates Mia Green Food from other vegan pepperoni brands. Mia Green’s vegan pepperoni is the perfect meatless alternative to put on vegan Italian sandwiches or to eat plain with some vegan bread.

Be-Hive decided to go a different route with their vegan pepperoni. Instead of focusing on replicating the taste of pepperoni, they decided to spice things up with their flavor profile.

This vegan pepperoni uses seitan to create an authentic texture that closely replicates actual pepperoni. The flavor and texture are so good that you can use this on a charcuterie board or as a snack. You don’t want to miss this brand of vegan pepperoni.

The delicious Sweet Earth Italian-Style Vegan Pepperoni Slices are ready to enjoy. You don’t need to cook or prepare them in any way; just open up the package and start munching.

The deli slices look like the real thing, and the packaging is almost identical to authentic pepperoni packaging. This vegan pepperoni is so good that it might fool your meat-eating friends.

Try these slices in a panini, on a pizza, or chopped into an omelet. This vegan pepperoni gets its protein from wheat gluten and chickpeas. It is a great snack to bring on a hike or adventure. It has the energy you need to keep going.

Sweet Earth has expanded due to its popularity; you can find it at regular grocery and health food stores.

The Very Good Butchers make their pepperoni with adzuki bean, giving their product a salty and desirable flavor that resembles real pepperoni. This vegan pepperoni is perfect for creating authentic Italian dishes with a vegan twist.

If you are looking for a more health-conscious option, Yves Veggie Cusine Veggie Pepperoni is perfect for you. This vegan pepperoni brand gives you a taste and texture close to the real thing but without fat, cholesterol, or artificial preservatives.

The Yves Veggie Cuisine Veggie Pepperoni contains soy protein, wheat gluten, and tofu for a filling meal. Add these pepperoni slices to a calzone with vegan cheese or spice up an antipasti salad. 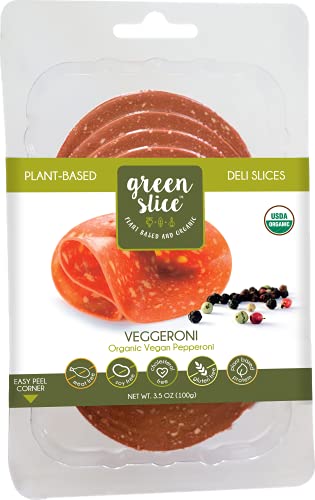 It can get tiring to say “vegan pepperoni slices.” What a mouth full. Green Slice solved this problem with their aptly named veggeroni! Green Slice Veggeroni gives you everything you could ever want in a meat alternative.

These deli slices are organic, meat-free, soy-free, cholesterol-free, gluten-free, and use plant-based protein. What a combination! Green Slice goes out of its way to avoid potential allergens so you can eat as healthy as possible.

Despite this emphasis on avoiding allergens, veggeroni tastes excellent! It has a pepperoni-like texture and meaty flavor. It can compete with the best vegan pepperoni brands. Veggeroni is the perfect deli slice to add to your favorite salad wrap or quesadilla.

One of the characteristics that other brands of vegan pepperoni are missing is the smokey flavor. It is hard to recreate this smell and taste in vegan meat alternatives. Somehow Feed Your Head figured out a way to give their pepperoni a smoky taste, and the final product is a winner.

Feed Your Head vegan pepperoni is salty, sweet, and smoky. That trifecta is a delicious combo that goes perfectly on grilled flatbreads or as an addition to vegan grilled cheese.

Feed Your Head uses simple ingredients to make its vegan pepperoni. They use vital wheat gluten, soy sauce, and maple syrup. The simplicity is what makes this vegan pepperoni so good. 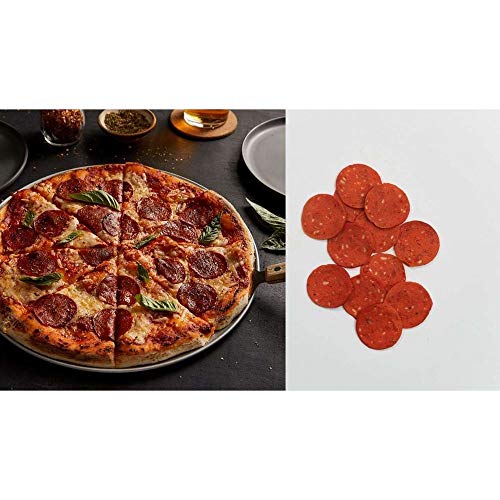 Field Roast is one of the leading vegan meat brands. Its products are popular in the vegan community due to their high quality and outstanding taste. The Classic Pizzeria Plant-based pepperoni slices are no different.

The Field vegan makes their vegan pepperoni with various protein-rich ingredients and a plethora of flavor-enhancing herbs. This pepperoni is well-spiced and incredibly delicious. As the name suggests, use this pepperoni on a pizza, you won’t be disappointed.

These are the best vegan pepperoni brands on the market. They all have unique flavor profiles and textures that make them stand out.

The next time you look for a vegan option for your favorite dish, try one of these vegan pepperoni brands. You won’t be disappointed!

The following are some of the most commonly asked questions about vegan pepperoni.

Is there a vegan pepperoni?

Yes, vegan pepperoni is a thing! It is a meat-free and vegan-friendly alternative to traditional pepperoni.

What vegan pepperoni does Pizza Hut use?

Pizza Hut uses a vegan pepperoni made by Green Giant.

Is there an imitation pepperoni?

Yes, many brands make imitation pepperoni. It might be made without any animal products, but it is still packed with flavor.

Who has plant-based pepperoni?