Whether you’ve been a vegan for years or you’re trying it out for the first time, finding flavorful vegan condiments can be difficult. Many condiments and dressings include non-vegan-friendly ingredients such as eggs, dairy, and honey.

However, this doesn’t mean that your food has to be flavorless, as brands are starting to make more vegan-friendly products.

While most BBQ sauces are vegan, you should still be wary of ingredients because many BBQ sauces use honey. If you’re looking for that smokey, sweet flavor, but need a vegan option, here are some of the best vegan BBQ sauce brands available. 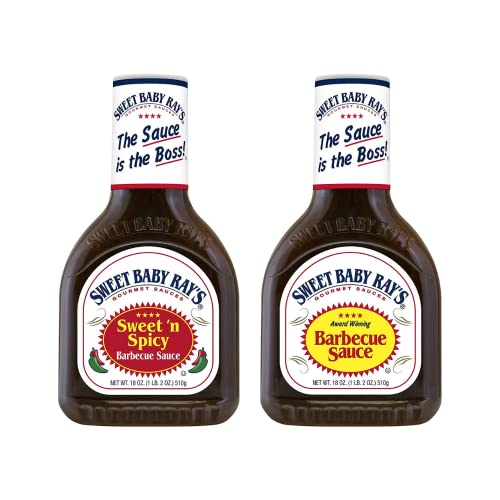 If you’re vegan and want to kick up the flavor of your food, you’ll be happy to know that Sweet Baby Ray’s BBQ sauce is vegan, gluten-free, and kosher!

They sweeten their sauce with sugar, pineapple juice, and corn syrup. Not honey! Their BBQ sauce is a mix of savory, sweet, and smokey. It makes the perfect addition to any BBQ meal. 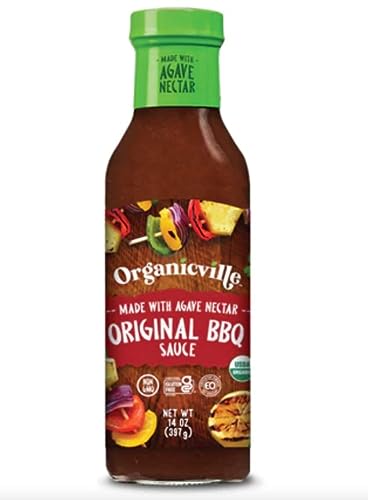 Organicville’s BBQ sauce is gluten-free, non-GMO, USDA organic, and vegan! If you’re looking for a BBQ that’s good for you, then this is the one to pick because they use all-natural ingredients.

They sweeten their sauce with agave nectar, which provides the perfect amount of sweetness while still keeping the sauce healthy. Their BBQ sauce also has a slight kick to it due to the addition of cayenne pepper and chili powder. 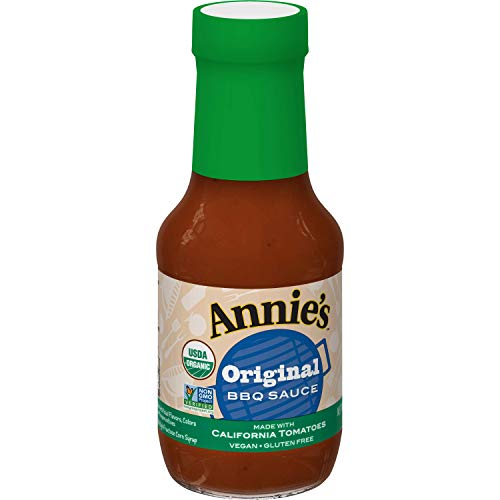 Annie’s is a popular organic brand that you can find in most grocery stores. Their BBQ sauce is USDA-certified organic, doesn’t use artificial sweeteners, and uses non-GMO ingredients.

Together, these spices bring a smokey spice to your food. However, it isn’t spicy in the sense that it’s too hot to eat, so kids will enjoy this BBQ sauce as well – especially on a good vegan chicken nugget. 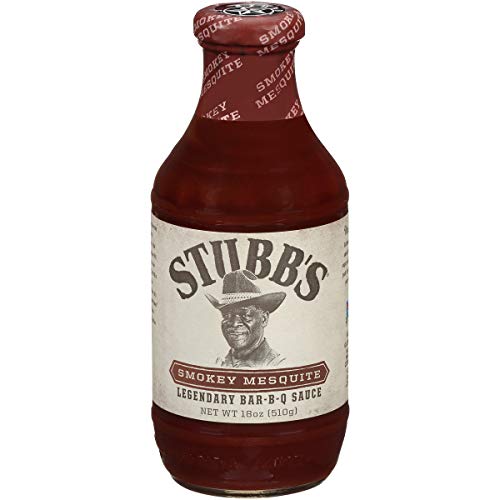 Stubb’s provides a line of BBQ sauces that are vegan and use sugar and molasses as sweeteners. The company states that their sauces are Texas-style, so you can expect the BBQ sauce to be very tangy (due to the vinegar) with a hint of sweetness and spice.

The only BBQ sauces they make that aren’t vegan are the Smokey Mesquite and Sweet Honey and Spice varieties due to their addition of honey.

While some of Kraft’s products, such as ranch dressing, aren’t vegan, their original BBQ sauce is vegan-friendly. They sweeten their BBQ sauce with corn syrup and molasses.

This is a great vegan BBQ sauce option if you’re not the biggest fan of the flavor of smoke. Kraft’s original BBQ sauce has less than 2% of the natural smoke flavor, so you’ll get more of a sweet tomato taste than an overpowering smokiness. 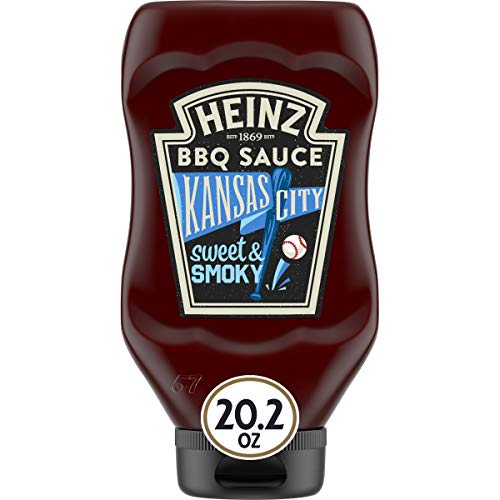 Heinz is a popular brand and most of its products are vegan-friendly, including their original BBQ sauce. They sweeten their BBQ sauce with sugar and molasses.

It’s on the sweeter side rather than spicy and smokey, so kids and adults alike usually love it. The sauce is also pretty thick when compared to other BBQ sauces, which makes it great for dipping.

Luckily, since Heinz is a well-known brand, you can find it in every grocery store. 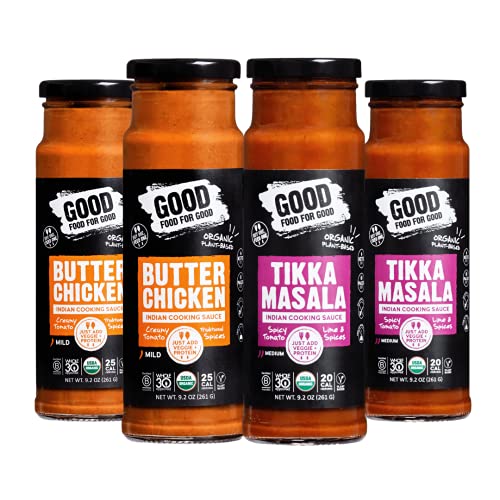 Good Food For Good offers an entire line of sauces ranging from various kinds of ketchup to cooking sauces. Their BBQ sauces are savory rather than sweet due to a lack of sugar, and they make great dipping sauces due to their thickness.

Their BBQ sauces, and all their other sauces, are vegan, paleo, keto, Whole 30-approved, USDA certified organic, and have no added sugar.

This BBQ sauce brand is also great for people who may have allergies, as the sauces are gluten-free, dairy-free, corn-free, soy-free, and nut-free. 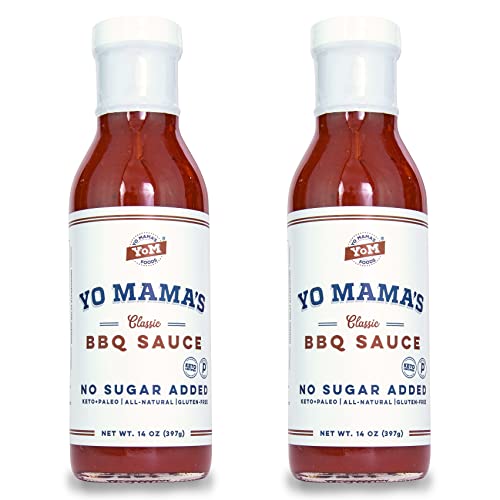 Yo Mama’s is another healthy brand that offers tasty vegan BBQ sauce. Their BBQ sauces have low sodium, no added sugar, non-GMO ingredients, and are dairy-free and gluten-free.

However, even though they don’t use sugar, the BBQ sauces still have some sweetness due to the use of monk fruit extract.

Their keto, paleo, and vegan BBQ sauces are all-natural and add the perfect sweetness and smokiness to every dish. 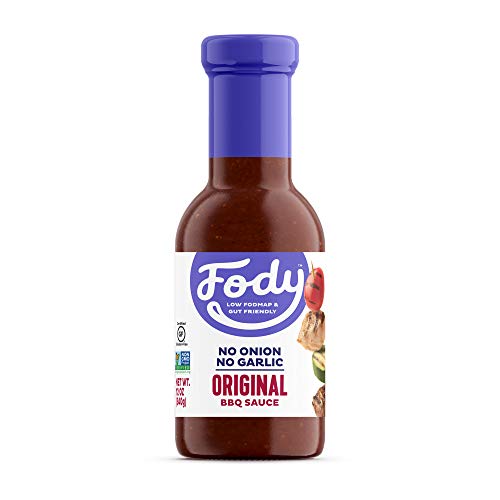 Fody Foods offers a variety of sauces ranging from pasta sauce to BBQ sauce. All of their sauces are 100% vegan and gut-friendly, meaning that their recipes:

Their no-bloat BBQ sauce uses apple cider vinegar for the perfect tang and organic cane sugar and molasses for a slight sweetness. Not only does it taste great, but there aren’t any unhealthy ingredients. 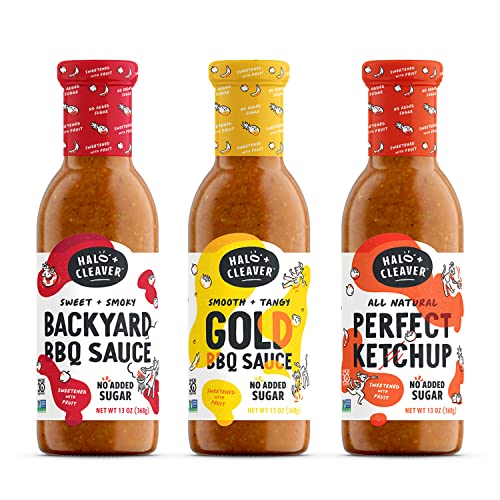 Halo and Cleaver offer different kinds of vegan ketchup and BBQ sauces to spice up your next meal. All of their sauces are gluten-free, plant-based, keto, Whole 30-certified, use non-GMO ingredients, and are keto.

Their BBQ sauces use fruit as sweeteners, so there are some healthy and vitamin-packed ingredients hidden inside. Pineapple juice, apple juice, and apple puree are the main sweeteners.

These all-natural ingredients are enjoyable to eat and will give you peace of mind knowing there is nothing harmful in their recipes. 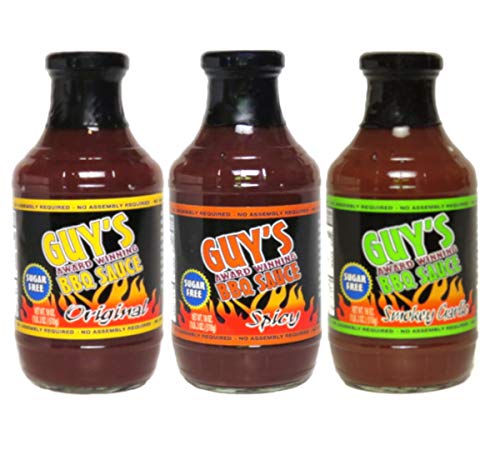 Guy’s Award Winning BBQ sauces are a healthier, less-sugary alternative to your typical BBQ sauce. Guy’s makes a line of BBQ sauces that are all vegan, sugar-free, low sodium, gluten-free, and trans fat-free!

This company’s BBQ sauce flavors include:

Each BBQ sauce is chock full of flavor, and it’s nice to know that there are multiple flavors available. 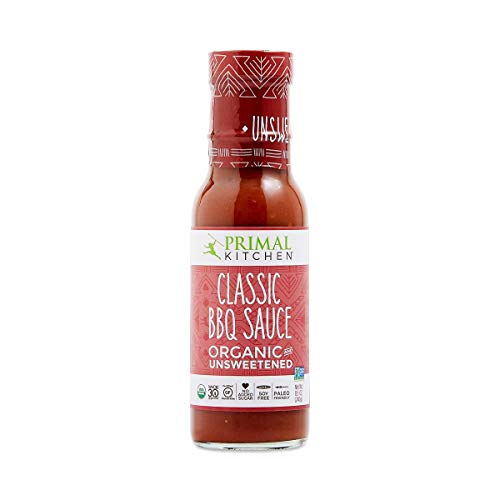 Primal Kitchen makes four different BBQ sauces, and they’re all vegan, have no added sugars, and are USDA organic-certified. You know you’re getting clean yet tasty ingredients with these sauces.

The flavors they have include:

The flavor is highly-important when it comes to food. Each BBQ sauce on this list offers a unique taste and can bring delicious flavor profiles to your plant-based meal. Try these vegan BBQ sauce brands with your next meal and see which one you like most.

Here are some of the most frequently asked questions about vegan barbecue sauce.

​​Which BBQ sauce is vegan?

Most BBQ sauces are vegan, except the ones that use honey as a sweetener. Honey is technically an animal product, making flavors such as honey BBQ not vegan-friendly. Some great vegan-friendly brands include Sweet Baby Ray’s, Heinz, and Good Food For Good.

Some of Sweet Baby Ray’s products are not vegan, including some of their BBQ sauces. However, their original flavor of BBQ is 100% vegan.

The answer to this depends on the brand. Most BBQ sauces that you find at your grocery store are most likely vegan, but you should always read the label just in case. The main ingredients that make BBQ sauces non-vegan are honey and bacon. But, if BBQ sauces have these ingredients, they’re usually in the name, such as “honey BBQ” or “bacon BBQ.”