Buffalo sauce is one of the most delicious additions you can make to spice up a dish. With its tang from the vinegar, kick from the hot peppers, and creaminess from the butter or milk, buffalo sauce has enough flavor to make you salivate.

While you may think of buffalo sauce only in terms of wings or chicken products, healthier, more health-conscious recipes have become popular, buffalo cauliflower. Buffalo sauce can also be a good marinade or addition to egg-based breakfast dishes.

If you are following a low-sodium diet, however, you may wonder if you need to sacrifice this essential condiment to adhere to your diet plan. Luckily, there are several low sodium buffalo sauce brands for you to choose from (just like low sodium BBQ sauce or lunch meats). 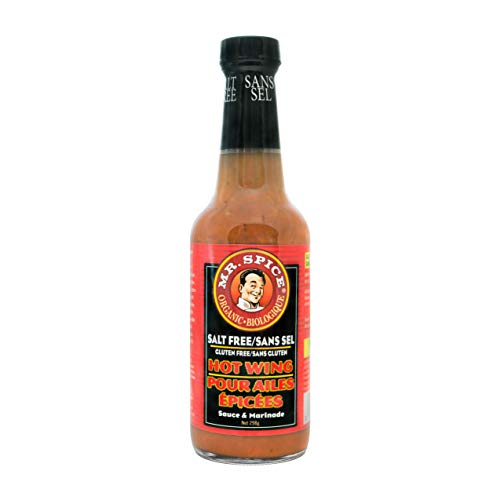 TGI Friday’s makes one of the best low-sodium buffalo wing sauces on the market. Reducing the salt content of buffalo sauce can sometimes affect the flavor, but that’s not the case here.

The TGI Fridays Buffalo Wing Sauce has a mild flavor, mild heat, and only 65 mg of sodium per serving (37.5 mg of sodium per tablespoon). There’s a little bit of spice with the tang, but the flavor is second to none.

Conveniently, TGI Fridays bottles their delicious recipe for sale at your local supermarket, so you can enjoy the same sauce the restaurant uses on its famous mouth-watering buffalo wings in the comfort of your own home.

Melinda’s Creamy Style Wing Sauce is a low sodium buffalo sauce that clocks in at 90mg per serving. The best buffalo sauces have a creamy flavor and texture, and Melinda’s does a good job of capturing that buttery taste. Ingredients are high-quality and fresh to pack the perfect flavor into each bite.

Be forewarned that Melinda’s is not for the faint of heart – the sauce has a blend of habanero and cayenne peppers that will leave your mouth burning!

You’ll want to keep eating this one though, so consider blending in some melted butter to cut the spice factor. 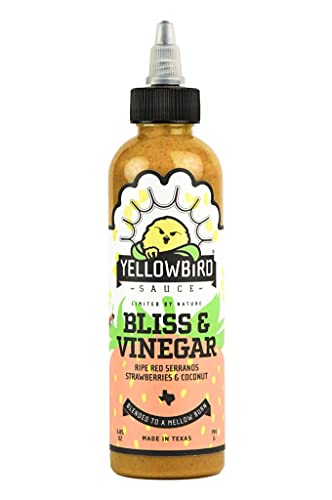 Yellowbird is an Austin, Texas, company that makes delicious hot sauces. Their Bliss & Vinegar Wing Sauce is a unique spin on the buffalo wing sauce genre, and it has only 95 mg of sodium per serving.

YellowBird uses Serrano peppers instead of traditional Cayenne or Habanero peppers. They also add strawberries, dates, and coconut cream to give it a sweet taste.

All ingredients are all-natural, and there are zero refined sugars, making this an excellent marinade and go-to sauce for a spicy, tangy, flavorful meal (similar to a Korean BBQ sauce). 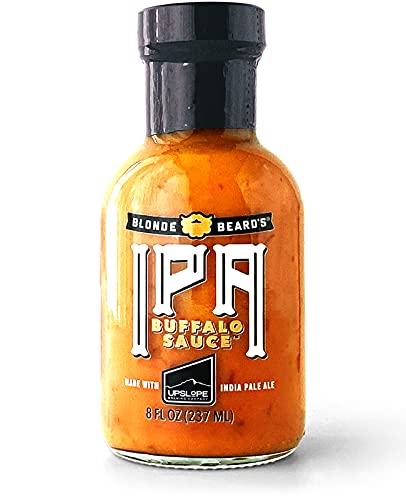 Buffalo wings and beer are a match made in heaven. Blonde Beard takes this winning combination a step further and adds beer to the buffalo sauce. And the best part? It’s low-sodium.

This sauce has 170mg of serving – less than half the sodium content of the leading buffalo sauce brands – and is flat-out delicious.

Blond Beard’s IPA Buffalo Sauce has Upslope IPA beer in it. The hot sauce has a unique combination of the bitterness from IPA hops with Cayenne pepper spiciness, and butter smooths out the flavors.

You’ll definitely want to keep this one as a pantry staple regardless of whether you’re following a low-sodium diet! 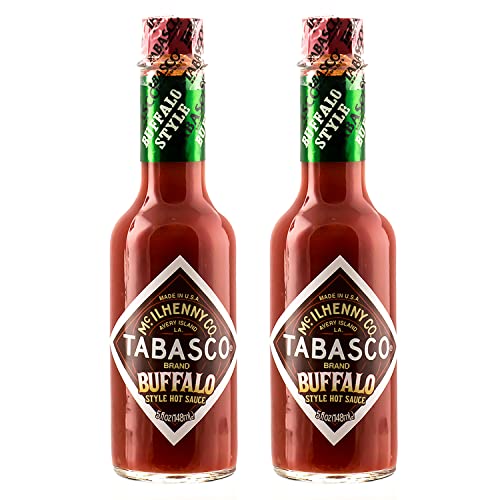 McIllhenny’s Tabasco Brand Pepper Sauce is one of the most popular hot sauces in the world, but the company also makes a buffalo sauce version.

The product has 190 mg of sodium per serving – the highest on our list – but still much lower than the leading buffalo sauce brands, and with only five simple ingredients, it’s easy to read the label and know what you’re consuming.

Target’s store brand, Good & Gather, has a delicious buffalo sauce with only 90 mg of sodium per tablespoon.

The Good & Gather Creamy Buffalo Dipping Sauce has a mild, somewhat sweet tang. You can toss your wings and cauliflower in this or use it as a marinade.

Made without artificial flavors or colors, you can trust this marinade to pack a spicy kick you’ll want to add to your salads, vegetables, and of course, chicken wings.

Is Buffalo Sauce High in Sodium?

Many buffalo sauce brands have high sodium levels because of their salt content. For those following low-sodium diets or trying to eat healthier, these salty sauces can be problematic.

The FDA recommends limiting sodium intake to 2300mg daily because of its effect on the heart and kidneys. This number is even less for children under 14 years old. Too much sodium in your diet can increase your blood pressure, thus elevating your risk for a stroke or heart attack.

Popular brands like Frank’s Buffalo Wing Sauce pack a whopping 460 mg of sodium per tablespoon. If you’re tossing a plate of chicken wings in a few tablespoons of buffalo sauce, you can quickly approach your daily sodium limit (and that even goes for vegan sauces).

Still have questions about the best low sodium buffalo sauce brands? We’ve answered some of the most frequently asked questions below.

Is there a hot sauce without sodium?

Is there a lot of sodium in hot sauce?

Unlike Buffalo Sauce, regular hot sauce usually does not have dairy ingredients like butter or milk. This gives it longer shelf life, and it does not need as much sodium as a preservative. Hot sauces usually have less sodium than buffalo sauces.

What buffalo sauce has the lowest sodium?

Mr. Spice Organic Hot Wing Sauce is sodium-free. This is the only buffalo sauce on the market that does not have sodium.

Can I make my own low-sodium buffalo sauce?

Absolutely, and it’s easy to do. Use your favorite low-sodium hot sauce and blend in some melted unsalted butter and white vinegar. You can add garlic, paprika, or whatever spices you like to round out the buffalo flavor.

Can I lower the sodium of a buffalo sauce?

You can lower the sodium of a buffalo sauce by diluting it with melted butter and vinegar.

Good news: if you’re following a low sodium diet, you don’t have to give up your beloved buffalo sauce or chicken wing appetizers. There are several low sodium buffalo sauce brands on the market that pack spice, tang, and a flavor you’ll want to keep in your pantry year-round.