Pepperoni is one of the most requested pizza toppings in the world. In America alone, pepperoni is on at least 40 percent of all pizzas ordered yearly. Its spicy, salty, delicious flavor and satisfyingly crunchy, chewy texture taste absolutely divine combined with seasoned pizza sauce, fresh dough, and melty mozzarella cheese.

Many also enjoy this sausage on sandwiches as they add an extra kick to Italian hoagies, and as an appetizer, they really liven up any charcuterie, cheese, and cracker tray.

But..what is pepperoni made of? Well, the answer to that might surprise you. 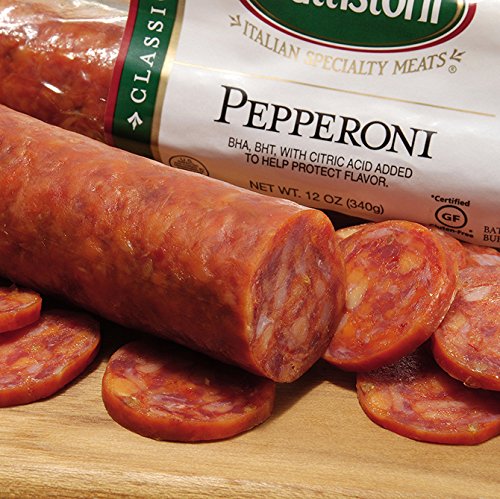 Many would be surprised to learn that pepperoni did not exist before the 20th century. It’s actually a form of salami created by Italian-American immigrants just after World War I.

And believe it or not, most Americans had never tried it before World War II, as pizza did not become popular in the U.S. until soldiers began returning home with a taste for the Italian cuisine they ate in Europe.

If you were to ask the average American in 1938 where to find a good pizzeria, they would likely look at you like you were from Mars — even in New York City.

It’s interesting how this amazing sausage feels like it’s been with us forever, but it’s still a toddler relative to food history.

Pepperoni is a derivative of the Italian word “pepperoni,” which is the plural of “peperone,”  which means “bell pepper.”

However, pepperoni does not contain any bell pepper. Food historians believe it was given that name to warn people not used to spicy sausages that this variety packed some heat.

And while there are some spicy salamis made in Italy for centuries, such as those made in Milan, that are similar in color and flavor, the first mention of the sausage didn’t show up until 1919 in America, around the time more Italian butcher shops and pizzerias began springing up on the East Coast.

How Pepperoni is Made

Pepperoni is made just like salami, except it uses different ingredients. It’s made using many of the same meats found in salami, such as beef and pork, but some versions also contain turkey meat (there’s also vegan pepperoni…).

The process begins with ground beef, pork, and sometimes turkey, mixed with various spices and ingredients such as chilies and garlic.

Sodium nitrate and salt are added to cure the meat. Next, lactobacillus bacteria is added to the ground meat, which lowers its pH balance. By doing this, the meat is better preserved and stored longer for safe consumption.

The bacteria also accounts for some of the pepperoni’s tangy flavor. Lactobacillus is also used in the production of cheese and yogurt, and it’s also made from wild yeasts used to make sourdough.

Like all other types of salami, the mixture is stuffed into ferments and casings for a few days and smoked. After, the pepperoni is relocated to a drying room for up to 20 days.

Once thoroughly dried, the sausage is ready to be packaged and shipped, either sliced or whole.

Pepperoni is about 70 percent lean with 30 percent fat. The texture is neither too coarse nor fine, with fat and meat ground to granulation of around 2-3 millimeters. The thickness of the slices determines whether pepperoni “cups” when cooking on top of a pizza.

Cupping happens when slices curl up around the edges, giving the pepperoni a crispier texture and allowing the fat to collect in the cup’s center rather than spread across the pizza, intensifying the pepperoni’s flavor.

Also, here’s a video about how pepperoni is made.

Because pepperoni is cured using spices, salt, and lactic acid, it has a spicy, salty, tangy taste and a chewy texture, which is why it’s usually sliced thin.

Most pepperoni contains spices such as garlic powder, paprika, and sugar, but there are many different spice blends out there.

However, paprika is pretty standard for most pepperoni recipes as it also helps give the sausage its classic reddish color and peppery flavor.

What part of the pig is the pepperoni?

Pepperoni is a sausage that uses pork trimmings. These parts are mainly fat with a bit of meat.

What is Pizza Hut pepperoni made of?

According to Pizza hut, their pepperoni is made using:

What gives pepperoni its flavor?

The meat, fat, spices, and lactic acid bacteria combined with the curing and fermentation process all contribute to pepperoni’s one-of-a-kind flavor profile.

Can pepperoni be frozen?

Pepperoni can be frozen during the sausage preparation process, making it much easier to grate. But it can also be frozen for long-term storage. Since the meat is cured, you really don’t have to freeze it for preservation purposes. But, if you want, you can freeze an entire stick or slices wrapped in plastic or sealed using a container or freezer bag.

Sealed whole pepperoni sticks will keep in the fridge indefinitely or in a pantry for about six weeks. Sliced pepperoni can last in the refrigerator for a couple of weeks, if not months, and in a freezer for between 8-12 months.

The main threat of spoilage is when the fat in the pepperoni is exposed to heat, oxygen, or light, causing it to turn rancid.