If you’ve ever wondered what the little black flecks are in some meats, such as salami, you’ll be pleasantly surprised to learn that it’s black pepper or peppercorns. Few types of meat can rival the flavor of salami that has peppercorns.

Salami and sausage with peppercorn are especially popular in northern Italy. Sausages and salami such as Piedmontese, Genoa, Felino, Sopressata – and world styles like Dominican, and more are all excellent options. Are you ready to learn more about some of these delicious meats? Let’s dive in! 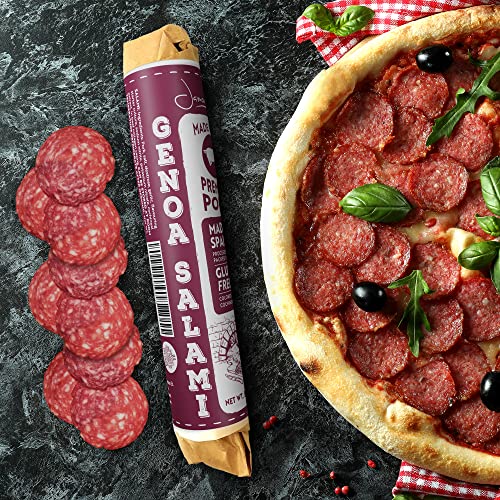 When you think of lunch meat or salami with peppercorns, the picture that pops into your head may be Genoa salami. Genoa salami is typically formulated with dry red wine from Italy.

This salami originated in Genoa, Italy, in the hilly interior area where pigs have traditionally grazed on chestnuts, acorns, and hazelnuts.

Genoa salami is famous for its garlic flavor, and it’s also famous for being studded with black peppercorns. The peppercorns can be either coarsely cracked or whole. Don’t confuse Genoa salami with hard salami. Hard salami is made with pepper that’s been finely ground. 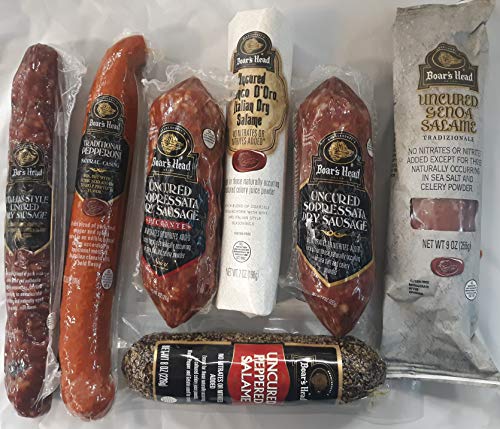 Many types of salami are closely associated with the regions where they originated. For Piedmontese salami (Salame Piemonte), that region is the Piedmont region in Italy.

Piedmontese is made with pork and infused with red wine of the Nebbiolo, Barbera, and Dolcetto varieties. The spices used to make this salami are nutmeg, cloves, and garlic. You can find Piedmontese studded with green peppercorns or black peppercorns.

Also known as the “king of salami,” Felino salami originates in the tiny town of Felino, Italy. With Felini salami, you have a salami that’s super smooth in consistency.

Don’t let the smoothness fool you, however. Felino is big and bold in flavor. Seasoned with wine and peppercorns, Felino is delightfully bold but also somewhat delicate. The spices are kept to a minimum, so the flavor of the meat and pepper stand out.

Not all Felino salami is made with peppercorns, but if you go to the trouble to find some, your taste buds will thank you. Traditionally, Salame Felino is made with “bench mince,” which is meat from the animal’s shoulder.

Felino salami has an intense red color, and the scent is equally intense. Nevertheless, the flavor is delicate, and the pepper sets it off perfectly.

Another Italian salami, Sopressata is available in both mild and spicy versions. The peppercorns are cracked before they’re added to the sausage, so you get a lot of pepper flavor (almost like pepperoni).

In addition to the black peppercorns, Soppressata is also made with Calabrian red pepper flakes that have been crushed. Then, the pork is ground with spices and hung to dry.

You’ll have to do some shopping to find this salami, but if you can find it, German salami with peppercorns is a rare treat. This traditional German salami is usually made with both beef and pork, and it’s studded with whole black peppercorns.

This sausage is made with spices and garlic. The end result is a smooth salami with a delicate black pepper flavor that’s perfect for sandwiches.

Below, we answer some of the most frequently asked questions about salami and deli meat with peppercorns.

What deli meat has peppercorns in it?

There are several different types of deli meat that have peppercorns. You can choose from various salami and sausage deli meats, and you can even find pepper ham made by Boar’s Head.

Which salami has the seeds?

According to the book “Salumi: The Craft of Italian Dry Curing” by Michael Ruhlman, Finocchiona salami originated hundreds of years ago in Tuscany. According to folklore from the area, peppercorns were too expensive at that time. Therefore, the local people substituted fennel seeds because fennel grew in the region abundantly. Finnocchio means “fennel” in the Italian language.