You are here: Home / Behind The Counter / BlueNalu Explained

Have plant-based fish alternatives left you feeling a little bit… Underwhelmed? Disappointed? Sad enough to say “you know what, forget about it”?

They certainly have for me. While I’ve enjoyed many plant-based protein substitutes for sausages and burgers, seafood is a much more difficult flavor to pinpoint with plants.

That’s why I was so excited to learn about BlueNalu. They’re riding the wave of cell-based meat, taking it in a totally different direction from the chicken and beef that most companies are aiming for.

Their goal? Delicious, sustainable, cell-cultured seafood that tastes exactly like the real thing. Curious? Let’s learn more about this up and coming seafood producer together.

San Diego-based Blue Nalu is aiming to be “the global leader in cell-cultured seafood, providing consumers with great tasting, healthy, safe, and trusted products that support the sustainability and diversity of our ocean.”

As seafood consumption trends upward worldwide, we’re in serious danger of overfishing our oceans — leading to catastrophic ecological breakdown (in addition to animal welfare concerns). Can one company really turn the tide on commercial overfishing? BlueNalu thinks so.

BlueNalu will be producing seafood directly from fish cells, making food that is as delicious and nutritious as the real thing — because in so many ways, it is the real thing. They’re committed to safety, transparency, and sustainability, with the goal of being stewards of the earth and the oceans while still providing us humans with the foods we’ve come to know and love.

And where’d they get the name from? The “Blue” part is easy to guess — that’s the color of the open ocean — but “Nalu” is loaded with more significance.

It’s a word of native Hawaiian origin that as a noun refers to the waves and surf, while as a verb means to meditate or contemplate. So you could say that BlueNalu means to contemplate the place of the ocean, the waves, the surf, the fish who live within them, and their place in our lives on land.

How Does BlueNalu Work?

BlueNalu is the pioneer in the field of “cellular aquaculture”, or creating seafood grown in a lab from sustainably sourced fish cells.

They first isolate and extract individual cells with promising regrowth characteristics, then place them into a specially formulated culture medium. By feeding these cells a complex mix of micronutrients, they grow in the exact same way that living tissues would inside of a fish.

The result? After four to six weeks of growth, these seafood tissues can be harvested, processed, and transformed into delicious seafood products.

Behind the research-heavy process used to create BlueNalu’s offerings, though, lies a series of environmental directives that lead everything the company does. They focus on five aspects of health:

At this time, BlueNalu — like every other cell-based meat producer — is awaiting FDA approval before being able to sell any of their cultured seafood products.

They’re hoping to offer mahi mahi, tuna, red snapper, and yellowtail by the second half of 2021. We hope they also move in to expensive seafood luxuries like caviar, crab, and conch one day.

So even though they’re hard at work developing a full range of products for sale in grocery stores, we’ll have to wait until they’re approved before getting a sneak peek into their product line. In the meantime, check out this CNET feature on BlueNalu to see what they’re up to:

How Do BlueNalu’s Products Taste?

To get a sense of how BlueNalu’s products stack up to the genuine article (as well as competitors), let’s turn to coverage from The Spoon‘s culinary demo of the company’s lab-grown yellowtail:

It seems that BlueNalu’s fish is unique in that it acts just like traditional fish in all cooking techniques, whether it’s served seared or steamed or raw… As Cooperhouse noted in the release, “we don’t believe that any other company worldwide has been able to demonstrate this level of product performance in a whole-muscle seafood product thus far.”

That’s high praise for a food category where most competitors’ seafood falls apart with the slightest bit of heat! I know I’ll be watching BlueNalu closely, and look forward to trying their cultured seafood in my favorite recipes. I can’t help but wonder how it’d work in a good dumpling steamer or fish steamer.

Where to Buy BlueNalu

As of the time of writing, BlueNalu is unavailable for the general public to purchase. They’re still in the R&D and scaling phase in an attempt to make their cell-cultured seafood as affordable (and delicious) as possible.

But with plans to produce 18 million pounds of seafood in the next five years, we’ll no doubt be seeing BlueNalu’s products on store shelves soon. 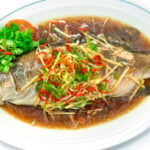 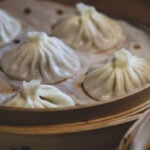 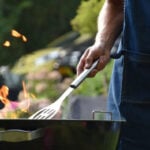