If you’ve never been a huge bacon fan because of its extreme saltiness, then you aren’t alone. Due to bacon’s sometimes overwhelming amount of salt, many people refrain from eating it unless they eat it very frequently, if at all.

However, if you’ve never heard of candied bacon before, then you should give it a try, because the taste is quite addictive to most people, even those who aren’t lovers of traditional bacon.

What candied bacon is made of

Many people who make candied bacon, which is also known as “pig candy,” like to make their candied bacon spicy by adding cayenne or chili peppers along with the brown sugar, but you can make yours however you like.

After adding liberal amounts of brown sugar as well as other desired ingredients, you will then bake the bacon (not on a skillet) in a pan until the center is caramelized and the edges are slightly crispy.

Some other ingredients that pig candy makers like adding to their bacon are: caramel, maple syrup, cinnamon, barbecue sauce, and more. The sky is the limit when it comes to customizing your candied bacon.

What kind of bacon do you use for candied bacon?

It’s totally up to you what type of bacon you’d like to use when making your candied bacon.

While some recipes call for thick-cut bacon, others strictly state that the bacon should not be thick-cut. It is not necessary for you to follow any recipe, because pig candy is so customizable that you can make yours however you desire.

How long does it take to make candied bacon?

The entire process takes about 30 minutes, including the time it takes to prep and cook it in the oven. Cooling the pig candy takes about five minutes, and then you can start enjoying this wonderful treat.

Can you eat candied bacon cold?

Since candied bacon is fully cooked, you can eat it hot, warm or cold, as any temperature is acceptable. Some people like eating pig candy at room temperature, while others enjoy either heating their candied bacon up or eating it directly from the refrigerator.

You might want to sample your candied bacon while it’s cold, hot and warm in order to determine which temperature you prefer most. It can be difficult to determine without first trying it.

How do you eat candied bacon?

Candied bacon is a very versatile treat, and you can eat it however you desire. Some people eat candied bacon right out of the pan once it’s cooled, while others crumble it up and put it in salads, soups, or even add it to sandwiches.

It’s not uncommon for people to crumble up their candied bacon and use it to top cookies, cupcakes, and more. 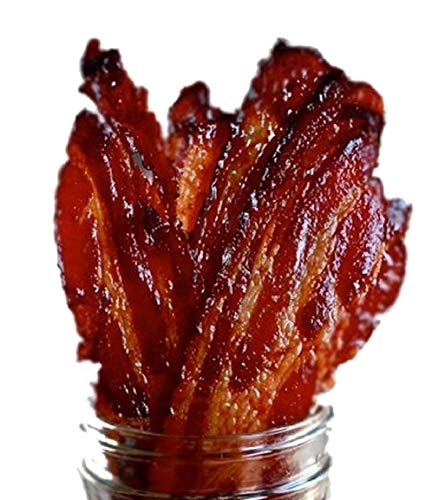 As soon as you bite into candied bacon, several different flavors will hit you simultaneously, which is a combination of sweet, salty and caramelization that will make just about every person go “Yum.”

The exact ingredients that  you use to make your candied bacon will determine the taste of your bacon. If you add things like maple syrup and cinnamon along with vanilla and the main ingredient of brown sugar, then it will taste just like actual candy.

Why you should consider coffee-flavored candied bacon

If you’re a coffee lover and a bacon fan, then you will absolutely love coffee-flavored candied bacon. Not only is there a distinct coffee taste in the bacon, but you will also enjoy the sweet and caramelized taste, and you will likely find yourself unable to stop eating it.

You will be able to get your daily caffeine fix while enjoying yummy candied bacon at the same time.

How do you make coffee-flavored candied bacon?

The only difference is that before covering the bacon slices with brown sugar, be sure to mix about 2 tablespoonfuls of coffee grounds in with your sugar. You can then add all your other ingredients, if you’re using multiple ingredients, and then place your bacon in the oven so the magic can happen.

How long has bacon been around?

Bacon is not a new food, and although the process of making bacon has likely evolved over the years, making it easier and faster to produce, bacon has been around since ancient Medieval times.

Is it okay to eat candied bacon with ice cream?

It’s okay to eat candied bacon with anything that you please, and some people love it with or in their ice cream.

In fact, there are some new ice cream flavors being introduced at grocery stores that contain bacon. The bacon may not necessarily be candied before it’s added to the ice cream, but many fans swear by the taste.

Is it okay to eat candied bacon every day?

Bacon is a high sodium food, but as long as you don’t have high blood pressure or any other health conditions in which salt could pose a problem, it should be fine to eat candied bacon daily.

Even if your health is fine, however, it’s a good idea to limit your daily intake to no more than two or three pieces.

Here are the answers to some commonly asked questions regarding all aspects of candied bacon that can help you to make the absolute best pig candy ever.

My doctor has placed me on a low-sodium diet. Is candied bacon something I can enjoy?

All bacon is cured using an astronomical amount of salt during the processing of it. Making pig candy from bacon doesn’t remove the salt, so you might want to refrain from eating any type of bacon, including pig candy.

If candied bacon is something that you absolutely adore, you could opt to make yours using reduced sodium bacon and eat it sparingly.

I am on a clean-eating plan and was wondering if candied bacon is something I can add to my plan.

Bacon is a processed food that often contains nitrates and other preservatives that are not conducive to a clean eating plan.

However, there are organic and all-natural brands of bacon that may be a bit costlier, but they don’t contain the nitrates and other preservatives that traditional bacon contains.

If you purchase these alternative forms of bacon, then you can add candied bacon to your plan. You should also opt for 100% pure maple syrup as opposed to brown sugar, as sugar isn’t included in most clean-eating programs.

Is there any particular pan I should use when making my candied bacon?

No, you can use any pan that you would normally cook bacon in. If you prefer your bacon to have as little grease as possible, it’s a good idea to use a drip pan so that the grease won’t remain in the bacon.

In fact, it’s actually recommended to use a drip pan so your candied bacon won’t be greasy. Some people might prefer their candied bacon with the grease drained off, so experiment a bit and make some with the drip pan and some without.

Will I really enjoy candied bacon if I’m not a fan of traditional bacon due to its salty flavor?

Everyone is different, and there is no guarantee that you will enjoy candied bacon if you’re not a fan of conventional bacon.

However, a majority of people who dislike salty foods absolutely fall in love with candied bacon the first time they try it.

The immense saltiness of regular bacon isn’t detected once the bacon is candied, because of the sweet (and spicy) ingredients. The only way to determine if you like pig candy is to try it.

Is it better to use “bake” or “broil” when making pig candy?

It is better to use the “bake” setting at about 350 or 375 as “broil” will cause your bacon to brown too quickly and possibly even burn. If you do decide to broil your pig candy at some point, you should stand nearby so you can keep an eye on it.

However, by opting for the “bake’ option, you can put the bacon in the oven and not have to worry about watching the bacon closely, as long as you set a timer.

I’m not much of a cook. Is there anywhere I can purchase candied bacon that is already made?

Unless you luck out and find a candy store or similar shop that sells candied bacon, the only places where you can really find it are at fairs and carnivals, or online.

And not every fair or carnival will have vendors that offer candied bacon, because the most popular items are corndogs, elephant ears, cotton candy, etc.

This is why most people make their own candied bacon, because they can have it any time they want as well as control the ingredients.

I only eat Canadian bacon. Can this type of bacon be candied?