Even if you don’t have time to cook three meals a day, you can still eat well with sandwiches if you choose the best healthy low sodium lunch meats.

Finding healthy cuts of lunch meat (or any processed meat) that are also delicious can be quite a challenge, though — and if you’re having trouble deciding on the right deli meat for your sandwiches and wraps, we’ve got you covered.

Before You Buy: Considerations for Healthy Low Sodium Lunch Meats

First, let’s take a closer look at the major concerns that you should take into account before deciding on a low sodium lunch meat:

From The Experts: How Much Salt Is Healthy?

Because excessive sodium intake increases the risk of heart troubles, the American Heart Association is the go-to authority on how much sodium you should have in your diet. Here’s a statement from their article “How Much Sodium Should I Eat Per Day?“

The American Heart Association recommends no more than 2,300 milligrams (mg) a day and moving toward an ideal limit of no more than 1,500 mg per day for most adults. Because the average American eats so much excess sodium, even cutting back by 1,000 milligrams a day can significantly improve blood pressure and heart health.

They then go on to clarify: “And remember, more than 70 percent of the sodium Americans eat comes from packaged, prepared and restaurant foods — not the salt shaker.”

Did you know that the United States Food and Drug Administration has an official system for listing sodium content on labels?

It’s an incredibly handy way to decide on low sodium lunch meats (and bacon) when you’re at the grocery store. Here is what each label means:

If you’re looking for brands in a grocery store near you, keep these guidelines in mind to help you find the healthiest lunch meats.

We’re usually on the side of choosing a diverse spread of brands to feature in our articles. In this case, however, there is one outstanding brand for low sodium lunch meats that’s head and shoulders above the rest: Boar’s Head.

Let’s take a closer look at five of their most delicious and healthiest deli meat options.

Boar’s Head’s uncured turkey bacon is amazingly flavorful, and has just enough fat content to still crisp up when sautéed. It’s perfect for BLTs and as a topping for salads.

Free of preservatives and low in sodium, Boar’s Head’s no salt added turkey breast is recommended by the American Heart Association.

It’s also free of gluten, nitrates and sodium nitrite, dairy products, and MSG, making it an excellent choice for a healthy low sodium lunch meat. Look for their salsalito turkey for a bit of a kick.

Made from the tender and flavorful cap-off top round cut, this lunch meat is given a basic seasoning of salt, pepper, and garlic before being roasted to delicate perfection.

A classic lunch meat staple re-imagined with much lower sodium, this is one of Boar’s Head’s most popular products.

It’s slow cooked and slices easily, making it a great choice for sandwiches, salads, or wraps.

Pork, beef, and savory spices are pureed into a smooth and tasty lunch meat product, all without the salt that usually comes with bologna and cured.

It’s hard to think of a better lunch meat to pair with a grilled cheese — bonus points if you pair it with Boar’s Head’s lower sodium American cheese as well.

If you use Boar’s Head’s packaged products, it’s a quick, easy, and healthy meal any time of day. Also look for their oven roasted turkey breast.

With 42% lower sodium than their original oven roasted chicken breast, the golden classic chicken breast is a healthy alternative that’s endorsed by the American Heart Association.

It’s delicious on a chicken sandwich, or as part of an appetizer tray with other low-sodium meats and cheeses.

Lunch meat is a really complicated area of nutrition – full of tradeoffs and variables. Here’s a few FAQs that we get regularly.

The best low-sodium lunch meat substitutes are probably lean cuts of beef like top round and flank steak, pound for pound the only other substitution that usually works is pork. Top round and flank steaks contain approximately 30% less sodium than ham and bacon (approximately 400mg/serving) and because pork contains a little more fat than beef it’s even lower in sodium: 140mg per serving.

Lunch meats, on the other hand have around 800 mg of sodium per 1 oz serving. That means if you’re looking to eat healthier, your best bet would be to enjoy a small lean cut of meat with a healthy salad or vegetable side dish instead. The same goes for those who find themselves eating cheeseburgers often – buy should probably switch to a hamburger or turkey burger instead.

The saying “lesser of two evils” truly applies here. The goal is to simply choose whatever is less while still getting the enjoyment and convenience that is realistic in our weird modern world of food.

Where can I get low sodium lunch meats and deli meats?

You can find low sodium lunch meat and other deli products at some grocery stores, but personally we recommend that you visit your local deli and ask them kindly if they could slice some low sodium for you.

When you find a good deli, stick with them; most of the time they’ll be happy to slice some low sodium meats for you and it only takes them about 5 minutes.

Where can you buy a turkey breast without nitrates/nitrites?

Nitrate and nitrite are used to help prevent the growth of botulism-causing bacteria, which can cause dangerous food poisoning. They are naturally occurring chemicals found in many vegetables – celery for example contains about 1.5% of its weight as naturally occurring sodium nitrate or saltpeter (sodium nitrite), but the main source of sodium nitrate and sodium nitrite in our diets is from processed meats and other cured meats. It’s hard to avoid it, but check the above list of our favorites and follow the safe storage directions closely.

Can I use bacon as a substitute for deli meat?

Bacon contains more sodium than deli meat and, in fact, contains around 60% less protein. That means that if you’re looking to eat healthier and get more protein in your diet, switching from bacon to deli meats would probably be a good idea. While we recognize the convenience of using bacon as a low sodium lunch meat substitute, we recommend choosing lean cuts of beef or pork instead.

What is a healthy alternative to bacon? 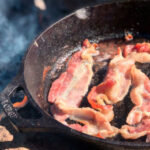 Of all the replacements available, one of the healthiest options would be turkey bacon. It contains about half as much sodium as traditional bacon (55% less protein), 16g of protein/ounce and only 1 gram of sugar. You can find turkey bacon at most grocery stores. There are also plenty of breakfast meat alternatives that would work at lunch.

Honey baked ham and smoked turkey both contain about half the amount of sodium (and protein) as regular deli meats and because they’re cooked they will keep in your fridge longer.

Can you make your own lunch meat?

You can make your own lunch meat & sausages at home. You’ll likely need a stuffing machine or grinder (read about the best grinders here), ground meat, salt, pepper, and casings to stuff the meat into (natural hog or sheep intestines) for sausages but it is possible. A good meat slicer can take a well-cooked cut of beef or turkey into think lunch meat slices. It’s typically easier if you’re using store-bought ground beef versus making fresh ground beef from scratch.

With all of that in mind, you’re now fully informed and ready to choose the best healthy low sodium lunch meats for your next meal (even if it’s not a sandwich!)

If you’re looking for more ways to make your low sodium diet also lower calorie and lower in saturated fat, we recommend checking out our guide to air fryers for meat — a low-fat cooking method that still leaves your food crispy and delicious or our guide to non-processed lunch meat options and gluten free options.