If you are interested in expanding your cuisine, you may have thought about giving seahorses a try. There are a lot of unique meats available, but this is one that a lot of people overlook.

If you would like to learn more about seahorses, whether you can eat them, and what their nutrient profile might be like, take a look at a few important points below.

Price of Meat does remind readers that purchasing & consuming meat in violation of the Lacey Act, Endangered Species Act, or CITES is not only super-illegal, but also super-uncool. While there are sustainably farmed seahorses, many seahorse species are under heavy threat & even endangered. Please be cool and go above and beyond in support of conservation. Learn what you can do to support endangered wildlife today.

Similar to other meats, the exact taste of seahorses will vary depending on how they are cooked. In general, they have a consistency that is similar to fried squid, also known as calamari.

Seahorses also have quite a bit of salt on them, so it is typically not necessary to add any more salt to the dish. It is also not unusual to see seahorses paired with dates or potatoes.

Even though it is not common for seahorses to be served raw, this appears to be more of a cultural issue than a safety one. They do not appear to have any overt toxins, but it is probably a better idea to fry a seahorse than to try to eat it raw.

Where Do Seahorses Live?

All seahorses are marine species. They typically live in tropical waters, intemperate parts of the world, and in coral reefs.

Seahorse populations can also be found living in mangrove roots, seagrass beds, and a wide variety of other aquatic environments.

Because seahorses are able to tolerate large changes in the salt level of the water, the different species are found in just about all areas of the world.

Yes, it is possible to eat seahorses. Even though a seahorse does not have a lot of meat on it, it can still make for a delicious meal.

They can be cooked in a wide variety of ways, and they are not unusual sights in street markets as live food. In particular, seahorses are commonly found served on a stick, similar to a wide variety of other meats.

When purchasing seahorses at a street market, you might be able to choose from several dipping sauces, which can make for a tasty meal!

Yes, seahorses are farmed. There are farms located in parts of Tasmania, Western Australia, and South Australia.

In 2004, these animals were added to the appendix of the United Nations Convention for the international trade in endangered species. This is also known as CITES.

As a result, in more than 160 countries all over the world, sea horses are only allowed to be bought and sold if they are in captivity.

This has been done in an effort to protect endangered seahorse species in the world from extinction.

How Many Species of Seahorses Are There? 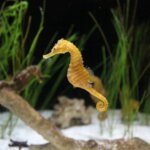 There are several dozen species of seahorses scattered all over the world. They are typically found in estuaries, bays, and coastal areas, with seahorses being found as far north as Norway and as far south as New Zealand.

Even though seahorses are not the strongest swimmers, they are typically found resting around stationary objects in the water. For example, seahorses might be found hiding under a rock or trying to camouflage with a try.

What Do Seahorses Eat?

Seahorses have a very long snout that they frequently use to suck up food. They also have eyes that work independently from each other. Most seahorses feed on small plankton, tiny fish, and small shrimp.

They tend to feast on animals that walk along the bottom of the ocean floor. Even though they do not eat a lot, it is not unusual to see seahorses traveling together.

When seahorses are found together, they might be stalking their prey, looking for something else to eat.

Does Chinese Cuisine Feature Seahorses in Any Dishes?

Yes, Chinese culture does feature seahorses in a wide variety of meals. Even though they can be served alongside numerous dishes, they are typically found in markets on the street.

Prior to serving seahorses, they are typically fried. They are added to a stick and cooked over an open flame or fried in some oil. Then, they can be served with anything from a sweet and sour sauce to a spicy sauce.

There are plenty of ways to get creative with seahorses, and they are convenient to eat while walking around shopping because they can be held on a stick easily. As a result, they are one of the most popular street foods in China, particularly in Beijing.

Even though seahorses are a popular cuisine among numerous Asian countries, China is the country that is most commonly associated with seahorses.

Even though seahorses are commonly served on a stick, as mentioned above, they are also a common component and soup and they are frequently paired with pork dishes as well.

Therefore, if you are looking for an interesting place to try a seahorse, you may want to take a look at some Chinese dishes.

However, we cannot stress this enough – it is your responsibility to verify the source of the seahorse. Consuming illegally trafficked seahorse is a big deal. It’s awful. It’s real. And it is deeply unethical and uncool. You can be charged for a Federal felony under US law.

Are Seahorses Considered a Delicacy?

A lot of people are unfamiliar with eating seahorse, so it is not unusual for people to think that it is a delicacy. In Japan, China, and numerous other countries, they are considered a luxury.

Therefore, if you are able to find a seahorse to try, do not be surprised if it is very expensive (or very illegal).

What Eats Seahorses in the Wild?

Seahorses have a number of natural predators in the wild. For example, there are manta rays, crabs, and sharks that eat seahorses.

Because they are relatively slow-moving animals, they are easily caught by others in the open ocean. On the other hand, seahorses can rely on camouflage to try to blend in with the background.

That way, they can reduce the chances of being caught by a predator in the ocean.

What Sauce Do You Serve With a Seahorse?

It is a matter of personal preference, but there are several sauces that you can serve with a seahorse. Because a seahorse is naturally salty, you need to pick something that will pair well with this type of taste.

For example, you may want to choose something vinegar-based. This is a common sauce for a lot of other seafood dishes.

Or, you might want to go with a spicy sauce instead. If you decide to reach for something spicy, trying not to overpower the taste of the seahorse.

Does a Seahorse Have a Lot of Meat on It?

No, a seahorse does not have a lot of meat on it. It is not a very fleshy animal, so you should not expect to get more than a few bites out of a single stick.

That is why it is not unusual to see a seahorse served with other types of dishes, such as pork or a large soup. That way, you can turn it into a meal without having to buy a bunch of seahorses, which can be expensive.

Even though trying seahorse meat is a unique meat to try, there are plenty of other options as well. For example, if you are looking for other animal meat to taste, some of the examples you may want to consider include:

Gator Meat: A lot of people are surprised when they hear that you can actually eat alligator meat. It can be a bit chewy and tough, but if you serve it with the right sauce, it can be absolutely delicious. You can take a look at a recipe for alligator meat here (or its distant cousing, the alligator gar)

Moose Meat: Another unique option you may want to try as moose. Even though moose has a slightly different flavor when compared to typical beef, it can be delicious if you serve it with the right ingredients. For example, you may want to check out this recipe, which includes moose, onion soup mix, and apple juice.

Frog Legs: If you are interested in other unique Asian dishes, you may want to consider giving frog legs a try. Here is a delicious recipe that uses red wine vinegar, yams, and plantains. Frog legs are not that different from chicken legs, and a lot of the taste is dependent on the sauce you serve it with.

Conch Meat: If you like other types of shellfish, you might be interested in giving conch a try. Conch is a common shellfish found in the Caribbean, and it is typically served with a nice zesty sauce alongside it. Here is a delicious recipe that uses beer, club soda, and Scotch bonnets.

Venison Meat: He might also want to give venison a try, which is a deer. For example, here is a tasty recipe that uses bacon, red wine, and tomatoes. You need to make sure you cook venison well because it can be a bit tough if you do not cook it all the way through.

There are a lot of interesting meats in the world, so do not hesitate to step outside your comfort zone and try something a bit different. You may end up falling in love with something completely new.