Before we talk about brisket flat, let’s zoom out for context. In the butchering process, the first pieces of meat that are separated from the carcass are known as the primal cuts.

No matter which system a butcher uses though, the brisket will always be one of the main primal cuts. It’s found on the front of the cow, on the lower half of the animal’s body (right underneath the chuck).

Because the cow uses this part of their body for moving around and supporting their massive weight, it has a lot of muscle. And that muscle can make the brisket a tough piece of meat to cook well.

I was introduced to the intricacies of butchering and cooking brisket while working at a barbecue restaurant in South Carolina.

Ever since seeing just how detailed the process can be — and how delicious the results can be in return — I’ve been a brisket fanatic.

So in this guide, I hope to share a little bit of my knowledge and enthusiasm about brisket as we explore the brisket flat, including: What it tastes like, how it’s similar to (and different from) the brisket point, a detailed section on how best to cook and serve brisket, and where to buy brisket (and a smoker!) for you to cook it on your own.

Before you start doing anything with your brisket, it’s important to know the difference between the flat and the point.

Taken together, these two cuts create one whole untrimmed or packer cut brisket. This is the cut of meat that barbecue enthusiasts are most excited about, as it offers a nearly-perfect combination of fatty and lean tissues that can be turned into a beautiful piece of smoked meat.

Most butchers don’t readily display their packer cut briskets, though — they cut them into flat and point cuts, instead.

The brisket flat, also known as “first cut” brisket, is the leaner half of the full brisket cut. It has the fat (also known as “deckle”) mostly trimmed away, which causes the cut of meat to lay flat (and gives it its name).

Brisket point, on the other hand, is the fattier half of the full brisket cut. On its own, it’s most often ground up or used as stew meat. You can read all about brisket point in our companion article here.

Every cut of meat taken from the brisket primal will have a robust, beefy flavor. The tradeoff, of course, is that brisket cuts are very tough as a result of being from the part of the animal most responsible for moving around.

The more a cow wanders, the tougher and leaner its brisket is likely to be — which means that any cut from this primal requires careful cooking and handling to make the best use of it.

Compared to brisket point, brisket flat is leaner and higher in protein. This makes it a good choice for stews and braised preparations, where the proteins in the lean muscle will have plenty of time and moisture to help break them down.

How to Cook Brisket Flat

Without a doubt, the most popular way to cook and serve brisket is by using a long, slow, low heat smoke. However, this usually assumes that you have a full brisket — not just the flat or the point.

And truth be told that is the best way to cook brisket. In my experience working with Southern barbecue chefs, leaving the two pieces together creates an ideal balance of fat and muscle.

Give that plenty of time in the smoker and the fat will render, making the meat even juicier and infused with rich smoky flavor.

However, a full sized brisket may not be in your budget — or you may just not need that much barbecued meat!

If that’s the case, making a few adjustments to your smoker or grill can make the brisket flat a great substitute (make sure it’s defrosted if frozen).

Because the brisket flat is leaner, the trick here is to use a lower heat than you would for a full brisket, around 225 degrees F.

That will keep the meat from going chewy, and give what little fat is on the cut plenty of time to render and soak into the meat.

If you’re having trouble getting a tender smoked brisket from the flat, using a marinade or wet rub will help. I’ve also heard recommendations to look for the brisket flat that has the oldest packing date — with about three weeks old being the perfect aging.

For a general overview of everything you need to know before your first brisket smoke, Traeger (the maker of pellet grills) has some great advice:

And what if you don’t have a smoker or grill? Well, the price of brisket these days makes it less of an affordable stew meat, but brisket flat does a good job in stew as well.

Just cube it up and give it a good sear before mixing it in with onions, potatoes, carrots, and salted beef stock.

A little bit of pepper and dried herbs, as well as a splash of red wine or dark beer, will make for an even more interesting flavor.

What to Serve with Brisket

While smoked brisket is absolutely delicious on its own, an authentic barbecue spread needs to have a full range of sides.

Here’s some of my favorites that I’ve picked up while working in barbecue restaurants:

Blue cheese mashed potatoes sound fancier than they really are. Make a standard batch of mashed potatoes (Yukon golds are my favorite potato for mashing), then add in a few ounces of blue cheese while they’re still hot.

Taste as you add pats of butter and more blue cheese, aiming for “aromatic” without going all the way into “funky”. The natural flavor of blue cheese is a great complement to smoked brisket’s deep and beefy flavor.

Mac and cheese is a staple side in just about every barbecue-producing region. It’s hard to go wrong with any recipe here, but the best mac and cheese I’ve ever had used a four cheese blend of manchego, cheddar, parmesan, and a touch of blue cheese (which once again pairs beautifully with brisket).

Mixing bread crumbs and parmesan to layer on top before baking really adds the final touch, creating a gooey and crispy crust that’s a perfect complement to the cheesy texture below.

Coleslaw provides a fresh and tangy crunch to a barbecue spread. You can make it in the creamy style, with plenty of mayonnaise.

Or in a hot vinegar style, omitting mayonnaise and using apple cider vinegar and a few fresh chili peppers to give it a real kick. Either way, the easiest method to prepare the cabbage and other veggies is using a box grater.

Stewed collard greens are a Southern classic, and a great way to add a little bit more variety to your meals. Whole collared greens are pulled apart by hand, then cooked down with bits of bacon and plenty of stock. Give these a long time over a low heat on the stovetop; collard greens need a long time to really tenderize and soak up the stock.

And for even more barbecue sides perfect for serving family style, check out our companion article on brisket point too!

Because of its popularity among barbecue lovers, brisket has experienced a significant jump in price in the last couple of decades. And that’s if you can even get it at your local butcher’s before it’s been bought out!

Here are a few substitutes you can use instead of brisket flat, with notes on how best to prepare them:

Where to Buy Brisket Flat

We wrote a whole post on where to buy brisket, but for any cut of beef, the first place you should look to buy is at your local butcher shop.

They’ll stock the freshest meat available to you, sure — but even more importantly, developing a relationship with your butcher will give you access to top tier cuts of meat that you might not get otherwise.

So when you’re shopping for brisket flat, check in your area for a locally-owned butcher shop first. If that’s not available, try talking to the butcher counter at your nearest grocery.

Big name grocers will often have the largest selections, but not always the best prices. For a more affordable alternative, consider going to a Mexican market and inquiring at their butcher counter.

If all else fails, you can also buy brisket flat online. Porter Road is my go-to shop for ordering beef and pork online — but they only sell brisket in packer cuts for whole smoking.

D’Artagnan sells an Angus brisket flat that’s probably the best quality you’ll find for this specific of a cut.

You can also shop other online meat stores like Crowd Cow and Snake River Farms for different pricing & types (Wagyu!) and delivery options.

And to wrap things up, let’s take a quick look at some of the questions we’ve heard guys asking about brisket, be it flat, point, or otherwise.

What is brisket called in the grocery store?

Most brisket sold in grocery stores is the same as the topic of this article — the flat cut! Otherwise, you’ll find full briskets advertised and sold as “packer cuts”.

How many hours does it take to cook a brisket?

Brisket cook times can vary widely based on what temperature you’re smoking at. But as a general rule, plan on about 45 minutes per pound of meat, assuming a temperature of about 275 degrees F.

Is chuck roast the same as brisket?

Chuck roast is from the shoulder of the cow, while brisket is taken from the lower quarters. The two have a very similar composition and taste though, and chuck roast can be smoked to perfection much like brisket.

What part of the cow does brisket come from? 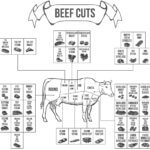 Brisket comes from the front, lower quarter of the cow. It’s the part of the cow attached to the legs that have a lot of muscle and get a lot of work during the day.