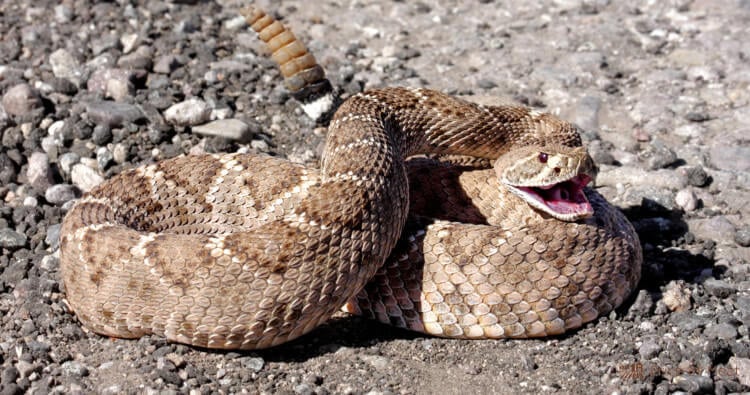 Rattlesnakes: They’re one of the most easily recognizable of the snake family, and well-known for their venomous bite and noisy tail rattle. There are 36 known species of rattlesnakes and some 70 subspecies — all of which are native to the Americas. Their range stretches from southern Canada through Argentina, making the rattlesnake a constant presence in wooded and desert areas.

But have you ever thought of eating rattlesnake meat? They are a fairly abundant source of wild meat across North America, after all. And the longest rattlesnakes can reach up to 8 feet in length — potentially providing an awful lot of meat for a hungry outdoorsman. But with their status as the leading cause of snakebite injuries in the Americas (and a protected conservation status similar to turtles & other reptiles in many areas), getting your hands on a rattlesnake for cooking can be quite tricky.

In this guide, we’ll take a full look at the rattlesnake’s role as a source of meat. That means exploring what rattlesnake meat tastes like, how nutritious it is, and how to safely prepare and cook it. And while we can’t give you the answers to every single rattlesnake-related question, we’ll also cover a little bit of how and where to find rattlesnake to cook in your own kitchen.

Capturing & eating a rattlesnake is really bad idea. This article is only for educational reference for curious culinary minds looking for hypothetical stories to swap around the campfire. Price of Meat does not condone, endorse, or encourage actually eating rattlesnake (or any wild snake) meat at all.

Rattlesnake is sometimes called “Desert Whitefish” in the American Southwest, and with good reason: The anatomy of a snake closely resembles that of a fish, except that it lives on land rather than in water.

That’s the good news; now for the bad. Not many people consider rattlesnake meat a fine meat to cook with, for a few reasons. First, it’s filled with tiny rib bones all the way down, and that can be unpleasant to chew around. Second, the rattlesnake meat itself is relatively lean and sinewy. And last of all, the meat itself doesn’t have much flavor to begin with.

In short: Rattlesnake meat is no delicacy. It’s more often used as a last-ditch food in survival situations*, or as a curiosity in the kitchen should you find and kill a rattlesnake in the wild.

*to state the obvious, if you are in a survival situation, trying to capture & kill a rattlesnake will almost certainly decrease your odds of survival

Here’s the good news, to balance out the fact that rattlesnake meat isn’t particularly tasty: It’s actually quite healthy, being rich in protein, vitamins, and minerals with few calories.

Exact nutritional information for rattlesnake meat is hard to come by, as it’s not generally considered an animal that’s safe for food preparation. Nutrition value estimates for 100 grams of snake meat usually put it at around 100 calories, with little fat and plenty of B Vitamins.

Even more curious, snakes and their venom have been used as medicinal treatments in Chinese medicine for hundreds of years. As far as 1400 years ago, Chinese herbalists identified species of pit vipers (of which the rattlesnake is also one) to treat arthritis, epilepsy, and certain types of cancer. It should go without saying that you should consult with a medical professional to use snakes for this purpose, and never attempt to reproduce these formulae on your own.

One of many reasons that rattlesnake meat has not become a popular food source is how dangerous it is to catch and prepare for a meal.

First, live rattlesnakes are extremely venomous. And while they won’t go out of their way to attack humans, when threatened rattlesnakes will lash out dangerously. Their venom is comprised mainly of hemotoxins — compounds that will attack the very blood that flows through your veins. If left untreated, a rattlesnake bite will almost certainly lead to death (or at least grievous injury).

Second, there’s a risk of being accidentally bitten while you’re preparing the rattlesnake for cooking. Even after they’re dead, rattlesnakes’ nervous systems can still fire off and lead to deadly, venomous bites. Preparation requires extreme caution, as we’ll detail in the next section.

Third, even after taking precautions to prevent bites, undercooked rattlesnake meat can have residual venom that will make you ill. Their bones can occasionally be contaminated with venom as well, leading to dangerous finger pricks while preparing the meat.

And fourth, there’s the ever-present danger of chemical and microbiological contamination in wild-caught meats. This can range from the more common salmonella to rarer pathogens to the presence of heavy metals.

Which is all to say: If you’re catching, preparing, and cooking your own rattlesnake meat, it’s a dangerous endeavor. Don’t do it. And if you insist at your own risk, always exercise the utmost precautions.

How to Prepare Rattlesnake for Cooking

With the previous section in mind, it’s worth saying here that the reward you’ll get for catching, killing, preparing, and cooking rattlesnake is rarely worth the risk. But if you’re going to do it, you’ll need to follow these steps.

First and foremost, you absolutely must remove the dead rattlesnake’s head before doing anything else. Don’t do this with a chef’s knife or other kitchen knife; it will place you within striking distance of the after-death bites. Instead, use a shovel or long garden hoe to remove the head completely prior to proceeding.

After this, you’ll need to skin and clean the rattlesnake. It’s best to watch this done in person rather than read how to do it; the following video from Sin City Outdoors is the next best thing.

How to Cook Rattlesnake Meat

With all of your efforts for safe preparation completed, you’re probably itching to know just how to cook rattlesnake meat. And to do so, think back on the comparison made for its flavor.

Fried rattlesnake is far and away the most popular way to prepare it, due in part to how easy it is to make while out in the backcountry. All you really need is a hot pan, plenty of fat, your rattlesnake, and a little bit of flour. Cut your prepared rattlesnake into 4-inch segments — and if you’d like to be fancy about it, go ahead and marinate those in buttermilk overnight to tenderize them.

Get a pan with an inch or so of oil in it nice and hot. Then dredge your snake pieces in seasoned flour with a plenty of salt and pepper. Slide each piece into the oil gently (to avoid splashing), and fry quickly, turning every minute or so to evenly brown it. When the outside is crispy and golden brown, your snake is ready to eat.

Baked rattlesnake takes a similar idea as fried rattlesnake, but does away with a lot of the oil and substitutes a longer cooking method. For this, you’ll want to coat your rattlesnake cutlets in a mixture of parmesan cheese, garlic powder, and breadcrumbs; this will help seal in what moisture the snake has and make for a juicier preparation.

Lightly oil a baking sheet and preheat your oven to 400 degrees F. To get the cheese and breadcrumb mixture to stick well, put a layer of mayonnaise on your snake cutlets before rolling them in the crumbs. Put the cutlets on the oiled baking sheet, then bake for 12 to 15 minutes. These taste especially good if you drizzle lemon juice over them to serve.

Braised rattlesnake does one very important thing: By incorporating extra liquids, it gives the tiny rib bones time to soften and break down so you won’t even notice them while you’re eating. The basic technique for braising is to sear both sides of your cutlets in the bottom of a Dutch oven or deep pan, with a little bit of oil or butter. Then add stock and seasonings to cover the cutlets, and cook covered over a medium-low heat for 20-30 minutes.

My favorite way to use braised meats is in tacos — and rattlesnake meat is no exception. Try using lard to sear it, then vegetable stock seasoned with chili powder and cumin to braise it. The meat will get crumbly and delicious, and perfect for topping grilled corn tortillas. Serve with queso fresco, cilantro, and lime for traditional Mexican flavor.

Another reason for the lack of rattlesnake on dinner tables? Many species of rattlesnake are threatened or endangered, and therefore illegal to hunt and kill. In their natural environment, rattlesnakes play an important role in balancing their ecosystems; when disturbed, this will just lead to more trouble for everyone.

Depending on which state you live in, hunting and killing rattlesnakes may be illegal. Always check your local laws to determine whether you’re allowed to hunt rattlesnake before deciding to try and cook with it. If you’re in doubt, check out this list of states where it’s legal or illegal to kill snakes.

Where to Buy Rattlesnake Meat

If you’d like to cut through the trouble of hunting, killing, and preparing your own rattlesnake meat, buying online is the way to go. The rattlesnake meat that you’ll find online has already been cleaned and prepared for you, greatly reducing the risk of accidental injury.

Meat Maniac also has cleaned rattlesnake meat available by the pound. If Exotic Meat Market is out of stock, this would be a good alternative for about the same price.

Fossil Farms has the best price per pound on rattlesnake meat, and it comes already cleaned and portioned and ready to cook.

Mountain America Jerky is worth mentioning as well. If you just want to try rattlesnake meat without going through the hassle of killing, cleaning, and cooking it, their smoked rattlesnake meat is an easy alternative – it’s a common exotic jerky.

And to wrap things up, let’s take a closer look at some of the most commonly asked questions about rattlesnake meat from across the web.

Unfortunately yes. Snake meat is one of the more dangerous meats that you can eat, from the risk of venom while uncooked to the risk of microbiological contamination if undercooked. Safely eating snake meat requires special attention to safe preparation and handling.

What are the benefits of eating rattlesnake meat?

Generally speaking, rattlesnake meat is high in protein and low in calories and fat. This makes it a relatively healthy alternative to fattier meats, as long as it’s prepared safely. Rattlesnake meat is also sometimes used as a home remedy in indigenous cultures, who value it for its role as an all-round health tonic.

How should you cook rattlesnake meat?

Because it is a very lean meat, it’s best to cook rattlesnake either very quickly (frying) or with plenty of liquids (braising or slow cooking). Otherwise, the meat will dry out and become very stringy. 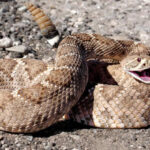 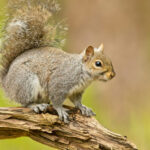 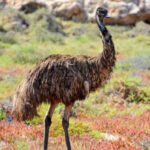 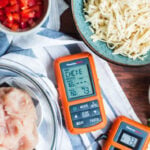